I don’t know any perfect people.

I’d even go so far as to say that I don’t know anyone who doesn’t have at least a few issue’s that they’re working out, myself included of course. The same goes for people I don’t know, be they Christian or Atheist, rich or poor, even if you’re the Pope or the Dali llama it really doesn’t matter! All of us share the same gene pool, and there below our fancy Latin taxonomic name I think it should say in parenthesis… 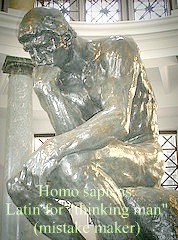 One common approach used by those who feel compelled to address this greatest of all truths as a spiritual problem or sickness is to engage in various forms of self medication. To, by the use of ritualistic practices, behaviors or good works, overcome or compensate for their bad or evil nature with good or righteous acts. For Christian people this sometimes means regular church attendance or being involved with some personal ministry or outreach effort that their church supports.

One thing I’ve noticed about volunteer work in the church is that there’s usually far more people who’re willing to sign on to do high profile activities such as taking meals to homeless people or visiting the sick than there are who are willing to work at the church.

There are certainly exceptions, but usually they have to pay people to come in and do the cleaning, lawn care, and other more mundane tasks that are essential to the function and care of the church whereas outreach ministries provide their participants with an immediate “this looks AND feels good for me”  pay off.

I do understand that in the body of Christ there’s a place for everyone to serve and I’m a huge fan of doing so but have you ever wondered why people who consider themselves to be servants all seem to be gifted the same way?

Call me cynical or whatever but it’s hard for me not to see it as strange, it’s as though what they’re really wanting is for themselves to be glorified by these works instead of God.

Over the past several years I’ve been on both sides of things. I’ve been the person in need and I’ve been the one who was in a position to give. I’ve been helped, and helped others as well. I’ve also been confused by people who would help you as long as by doing so they looked like a hero but then, when it was a much smaller matter where perhaps just a word from them asking after me and my situation would’ve meant a great deal they suddenly seemed rather indifferent.

I can still recall how struck I was by my own feelings when after volunteering with a local outreach ministry I found myself filling out insurance forms so people could get medicines at no cost from pharmaceutical companies. Within a couple of weeks I began to dislike doing it because of how boring and confusing it was at times. I began to feel uninspired, wishing I could be involved in some other aspect of the ministry that I might find more interesting.

I remember thinking… “this just isn’t my area of spiritual gifting!” I continued to show up and tried to do my best. It sounds bad to say it but when I eventually became financially unable to continue making the hour long drive in twice a week I was actually sort of glad.

These scenario’s are just small examples of what I think it means to look into your own heart and see how self centered and prideful each of us are. Of how desperately each of us are in need a Savior, and how amazing the grace of God which is extended to each of us through His Son Jesus is!
To me, the most remarkable part of this story is how faithful God has been to me. How He’s shown me through untold small miracles how much I mean to Him. How is it then that I can turn away from what could’ve been an opportunity to share Christ’s love with someone else through simple things or grow weary in serving God because I don’t think it’s a good fit for me? Things like spending time with people you may find repugnant but who God has put on your heart, or perhaps doing boring, tedious things you may not actually like to do.
Who knows, maybe if by our doing these things in a selfless manor hoping for some privilege to share Christ through it we might just find our real place of service. We all want to find our purpose in Gods kingdom and play our part in His great plan. For some it’s to be center stage with the white hot spot light and Gods anointment on them, and for others it’s to work in the background in a supporting role of some kind.
What most of us don’t realize is that it’s only through our trusting God and being willing to do whatever He calls us to do in whatever circumstances we find ourselves that we’ll ever truly find our way. There comes a point where we have to stop looking at ourselves and start looking only to Him as the source of everything! We don’t look down, or back, or anywhere else but to Him! That’s when the power of the Lord our God will be seen in a mighty way in our lives and in the lives of those who we’re seeking to serve in His name!
36.622469 -91.209057