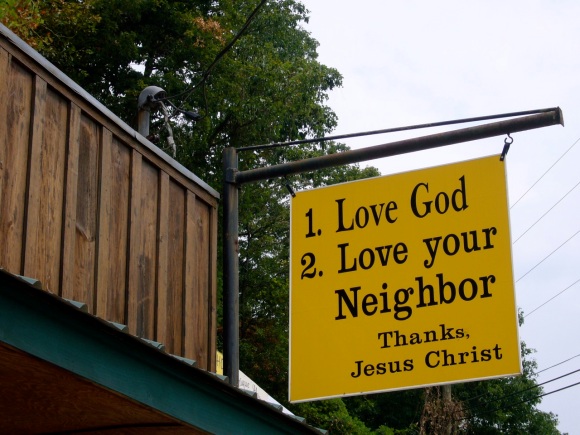 As you may know, we had a hum-dinger of an ice storm here where I live in Southeast Mo. It knocked out power for an extended period of time and left “tree debris” everywhere in our town. The ministerial alliance in our community got together and decided to go out into the community and clean up peoples yards last Saturday, I volunteered!

We cleaned up the large limbs, and cut what would be usable as firewood into stove logs. It was a wonderful feeling to help the mostly older people who really appreciated it!

I was talking to one of the pastors who told me about a lady who’s yard was full of limbs. He had offered to clean up her yard but she simply couldn’t accept that anyone would do it for free and was very reluctant to allow it. I told him about a man who we had worked for who had insisted on giving us money, after we had explained that we were “volunteers”…he said “I can’t see you guys doing all of this work for nothing” I told him “we’re not” and that we were happy to do it because we truly believed there was a blessing from the Lord in it for us, and also that we were happy to help him because of what the Lord has already done for us! (set us free from sin). There were some confused expressions on the faces of people, which grew into smiles, and seemed to warm the chilly morning.

I can totally relate to people being reluctant or being confused by this “free lunch.” I can remember how I felt when people told me about Gods gift of salvation,and how I thought it sounded too good to be true. I had, like many people been let down by many things I had trusted in before. The memory of the pain was a strong deterrent to me being able to accept Christ or this “gift” I had heard so much about. Our worldly mindset tells us that there are always strings attached to things that seem to be free, so it’s better to pass on things that not only don’t make sense to you but that also might obligate us somehow with the fine print we didn’t understand when we accepted the “free” item. It’s a dark bit of business that our enemy is up to, convincing us that we’re unlovable by anyone… that we are hopelessly condemned to blindly fumble through life searching for the square peg to fit into our square hole, and that we’re failures, or “losers” because we can’t find that “peg” in the things or stuff of this world. I spent the majority of my life doing just that, but it was Gods ACTIONS toward me that opened my eyes and my heart to what He had for me. Not simply the many times he saved me from my own incredibly dangerous stupidity, or delivered me from the addictions I was ensnared by, but mostly for what He did for me on the cross. I grew to love Him after I began to understand how much He loves me! ME! and friends, that is the silver bullet to the werewolf of this world! It is the antidote to what this world has to try and scare me with! whats going to happen with this economy? (God loves me and He’s in control) My job…? Whats going to happen to me and my family if,if,if, same answer! I can face anything that this world can dish out, (even death) how? because of the love of Christ, FOR ME! He stood up in my place, He took my punishment, He paid my debt, and someday, I’ll go to where He is for eternity! I know, too good to be true right? but it IS Because He is the WAY,the TRUTH, and the LIFE! and He’s waiting for YOU!