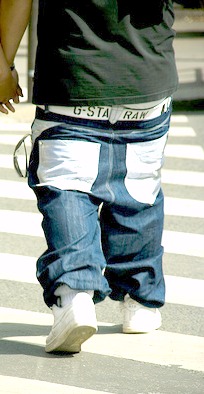 Chasing after fashion trends is something we Americans do like no one else! We go to great lengths to express our status and identity through any number of vehicles such as cars, clothing, and even our religion! One flagrant example of this fashion victim mentality I’ve noticed is the practice of young adolescent males wearing their jeans pulled down over their boxer shorts…

“What’s the harm in it”  I protested to myself…don’t you remember? You certainly had your share of “youthful quirks” that were certainly much worse!  Recently I’ve began to notice I felt the same about other fashion statements I saw happening around me and so I started digging for the common element ‘d offence. In my attempt to sort out my feelings regarding the latest hip-hop urban dress styles, the first thing I made note of was that I didn’t really care that the young black men did it. I realized that my annoyance instead had to do with the young white adolescents who were doing it. Upon further analysis I surmised that my feelings were a product of my disappointment with a people who because of some cultural funk deficit became imitators of those who they perceived to be flush with the fashion.

I decided to look up the root word of fashion which I understood to be “fash” and upon doing so was gratified to discover that it’s definition (please click the link) quite accurately described the overall effect all of this fashion had on me. Although it may not technically be the root of the word fashion I found myself intrigued at the insightful comparison’s it’s definition invited, I’m yet to be fully convinced there isn’t an actual connection between them somewhere.

How curious it is to me that the key to the success of any fashion trend lies in it’s ability to evoke strong and yet divergent reactions in people. It hardly matters if that reaction is one of love or hate, the only reaction it can’t abide is one of indifference. Controversy is critical to fashion! I can’t think of any truly great iconic fashion trend that didn’t divide people. Remember long hair? How about “mini and micro” short skirts? Another curiosity is that it’s typically young people who’re the most fertile ground for cultivating these phenomenon however I suspect that regardless of a persons age theres still an element of rebellion at the core of these behaviors.

Even the lack of what’s typically considered fashion is a fashion. Amish people wear clothes that they make themselves that are mostly blue and black, do they have to do that? No! They make pretty good money around here, and so I’m pretty sure they could afford to buy well made modest clothing but they simply choose not to, at least in part I believe,  so that they stand out from other people. All of this is done in the name of their religious beliefs and customs.

What about people who have incorporated Jewish traditions such as the observance of the festivals etc…into their Christian expression of faith? This is another topic I have feelings about similar to the other’s I’ve mentioned. In my research regarding this matter I talked to Jews, messianic Jews or Judeo-Christians and “Christians” who perhaps see themselves as being more Jewish than Christian, to gain their insights. I read some of the works of Saint John Chrysostom (c.347-407) who wrote some very specific homilies which I saw as being both enlightening and freightening. I was directed to the works of Stan Telchin, who somehow managed to inspire practically every Messianic Jewish Leader in this country to band together against him and the ideas expressed in his book entitled,

“Some Messianic Jews say: ‘Messianic Judaism is not Christianity.'”

A Loving Call To Unity

Starting with the title it was a bit confusing to me, But it seemed to clear quickly. Here’s an excerpt from the forward.

I think that somehow the answer to all my questions and the explanation of the root cause of my feelings on the subject lie within this statement.  Could it be that my unsettled feelings have to do with my perception of Christians who seemed more concerned with being “Torah observant” than they are with being Christ centered? I’ve no doubt that this is a far more complex issue than is the juxtaposition of someones trousers and their undergarments, but in another way perhaps it’s not. None of us can be what we aren’t, but whether the goal is simply to be cool posing as someone other than yourself, or to have a relationship with our heavenly Father, in either case theres no need for any act! All of us have the same access to the Father through Christ and we’re definitely not fooling Him! The most important thing that any of us can do is to know who we are in Christ instead of trying to be something other than we truly are or being someone else that’s an imitation, that’s merely…